Bard of the Avenue

This week a friend died of cancer. I remember her as a funny, creative person. She would push the tip of her nose and make a beeping noise which would always make her children smile. Death has a way of reminding us of our own mortality, of the shortness of life and of how precious life is.

I Will Remember You

Of all the choices taken, of all the verses sung

I will remember you in time,

When we became as one.

We walked along a solemn road, we two our steps together

One foot upon the other followed, despite the bitter weather.

And when I leave you, I’ll recall-

For if my heart should yield

I will still remember you- dancing in the field.

Marlene Salmonson, a woman who has been writing poetry all her life, is our first Bard of the Ave. Her role is to write and perform poetry that reflects the life of the area’s seven neighbourhoods. She began her two-year term on September 1 and will serve in this role until August 31, 2014. Her first public event was judging the recent Words From The Ave poetry slam, which was part of the Kaleido Family Arts Festival. “I was totally impressed with the level of poetry,” said Marlene. “To read your own stuff and have the guts to put it out there is awesome.”Marlene will receive an honorarium of $1,000 a year and produce at least two original works each year. The Bard will also initiate one legacy project during her two-year term. As the Bard, Marlene will be available for any community activity, be it a local festival, Community League event, or other community functions. Marlene’s ideas as the Bard include doing a piece on restaurants on the Ave, getting a feel for all the neighbourhoods she’ll serve and reflecting the change that is underway. The challenge, the diversity of the area, her love of the community and the struggle to change its image led Marlene to apply to be the Bard. “I want to positively reflect what is happening in the community, but also be realistic,” said Marlene. “My house is next to the 111 Avenue Fire Hall, on the Norwood Trail to the Universal Bottle Depot. When people talk about the Avenue, no one knows better than I do. Nobody has to tell me what it is like living here.”

An Early Start
“The first poem I remember writing was at seven-years-old,” remembered Marlene. “It was about the love of my life, Cleopatra my Siamese cat, who always slept on my bed.” As a teen in an advanced high school English class, instead of doing critiques she would write a poem. “My teacher said they were good and that was the first time I realized poetry could be part of my studies,” said Marlene. Later while studying Pastoral Clinical Education, instead of reflections, Marlene would write poems. Her experience in hospitals was extensive because Carley, one of her daughters, has schizophrenia. Her first published poem “The Other Side of Glory” was written out of the experience of one of her
daughter’s hospitalizations. Writing brought Marlene thirty-five plus years ago to Alberta from her hometown of Halifax.She responded to an ad in the now defunct Alberta Report Magazine.“The publisher, Ted Byfield, sent me a plane ticket and that’s how I ended up here and met my first husband,” said Marlene. “He was one of the founders at the beginning of the Report and I did lithography, pho-tography and some proof reading.”
After a move to Thorhild, Marlene became a writer with the weekly Westlock Hub newspaper, which at that time had a circulation of 30,000. Marlene has fond memories of her three years as a writer and columnist. “I wrote a column called As the Namepi Flows, after the only real river that runs through the County of Thorhild,” said Marlene. She did commentary on politics, school boards, things in her family, and the church, but had carte blanche to write on whatever she liked. “I totally loved the job,” said Marlene. “And usually I had something funny in my column. At times flights of fancy would get into my column because of the need to comment on meetings where you think you’re going to die because you’re so bored.” Her husband always wanted to be self-employed, so they bought an old-fashioned metal type letter-press business. “We did specialized printing, like embossing to create unique business cards.  Our three girls were brought up in the business which we had for eighteen years.” Marlene moved to Edmonton seven years ago to support Carley with the birth of twins. During the pregnancy, for the health of the babies, her daughter had to go off the schizophrenia medication. As a result, she remained hospitalized after the birth.“My son-in-law and I were exhausted,” said Marlene. “The babies ate every two hours. We slept on the couch and snoozed when they slept. Their church family brought the noon meal for the first couple of weeks, otherwise we would have starved. Several of these folks were nurses, which was important because the babies were premature.” Marlene is currently finishing her Master of Theological Studies thesis at St. Stephen’s College, which includes poetry, and will spend her time in the community as Bard on the Ave sharing those experiences with residents.
********************************************************************************
The Other Side Of Glory
By Marlene Salmonson
I kiss you good-bye,
And leave you there amid the hospital linen,
Your face ashen,
Awaking only to the drugs,
the banging of the door,
the end of another bad dream.
I leave you.
I leave you to fight your sad nightmares,
where you wear your bright armour,and brandish a sword of steel.
Oh, Joan of Arc, so meek and mild,
You often lose to the ungodly foe
,And where you go I cannot follow- so I wait.
In the parking lot I stare in silence at your window,
The snow falls round
It’s so quiet here.
But inside you fight on,
I think I hear your sword whisper through the air-
Another miss.
Down here at night it may seem strange to see my shadow
Standing, staring.
From afar,
Someone might think I’m only wishing- Just wishing on a star.
**********************************************************************
The Bard of the Ave is an initiative of the Rat Creek Press and Arts on the Ave. Funding has been generously provided by the Norwood Neighbourhood Association. As the Bard, Marlene will be available for any community activity, be it a local festival, Community League event, or other community functions. Contact Marlene at bard@ratcreek.org  to invite her to write or perform a poem at your event.
( originally published  October 2012)
link to archived publication

Welcome to the new Bard of the Avenue blog! 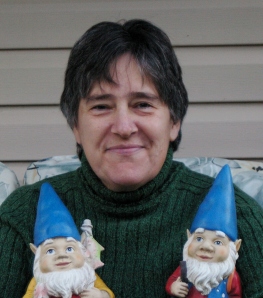 Guess who the one is without the beard? (Maybe I shouldn’t second guess my menopausal chin hair growth)

Thanks for joining me. This is a space for folks who love living in the 118 Avenue area in Edmonton, and especially for those who want to share their poetry.
I have two dogs and two garden gnomes, but more than two poems. We have awesome neighbours.
But ,when you envision where I live, don’t fill your head with majestic mountains or prairie fields. We are surrounded by Commonwealth Stadium and a fire hall, and sometimes overhead, just for interest, throw in a police or Global helicopter.
The “roar of the crowd” was formerly only a poetic image for me, but not now. I have sat on our swing in the backyard and listened during a football game. Sometimes I experience the sound from the stadium as a crashing wave of noise-filled air, a hot roar. Sometimes it sounds like a sigh and at other times the anguish of dispair, or the intense quiet or a collective holding of breath when the ball is airborn.
This is the Avenue. This is my home. This is one of the poems that it has inspired.

Alberta Avenue Audio
I sit on our backyard swing taking in the sounds of Alberta Avenue.
The high pitched demanding chirps of newly-hatched sparrows,
The screech, screech of the grocery carts, as the street nomads make their way to the Bottle Depot,
The automated lady-voice, coming from the P.A. system at the fire hall
Telling the firemen the latest disaster- followed by the shrill whine of the fire truck siren.
The steady basketball beat of my neighbour’s children and their ball.
The roar of the crowd from Commonwealth Stadium, when the Eskimos are winning and the almost perceptible sigh when they are not.
The music belting out from a boom box, as the man across the way fixes his truck, while listening to his favorite tunes.
The ringing of bells from the nearby Church.
This is the audio behind the story of a day in the life of Alberta Avenue.
A call to arms, a call to nature, a call to prayer-
All in my own backyard.