Bard of the Avenue

On Monday night, June 8, 2015, Edmonton Police Officer Constable Daniel Woodall was killed in the line of duty in Edmonton. He will be forever remembered with love.

we join our hearts in sad celestial sound

to fill a void, so deep, so rare a man

that only tears express what words we can

he was a Daniel his lions bravely fought

not rose nor sage but our forget-me-not.

Living next to Commonwealth Stadium can be interesting at times.

One hears the moans, groans, mutterings and cheers of the Edmonton Eskimo enthusiasts; I have also heard bands such as ACDC and Bon Jovi from my backyard. But last week, we were graced by the voice of Sarah McLachlan as she rehearsed for the opening ceremony for the 2015 FIFA Women’s World Cup Soccer event.

So, I wrote this haiku.

baby birds under a lilac bush

breathe in your voice

The Alberta Avenue Community League is hosting a garden party!

Digging in the garden

Setting out my garden gnomes in the brilliant sun

Dancing in the flower bed, what delightful fun!

Birds are singing, bells are ringing, sprinklers all a-spray

I’ll put away my parka—this seems a likely day.

We need a get-together, we need to celebrate

What about a garden party?

I’ll simply be a vision in rubber boots and such

But I’ll have to find a bow tie,

for the final touch

So, gather with your neighbours and new friends you’ll meet

just head off down the street.

I really thought you loved me

I really thought you cared

until you joined the Prentice team

and then my temper flared.

Has my beloved councillor become a PC “star”?

now I can only gaze at him—

on posters from afar.

I thought you were our councillor

someone in whom we trust

now I perceive our covenant

is made of pixie dust.

Oh, Tony, you may rue this day

your promises are air

for you have used us as a step—

a tread upon your stair.

It wasn’t in the scriptures, or on a kitchen scroll

But written on a sea can discovered on a stroll

“We Believe in 118” began this earnest prayer.

That we believe, don’t be deceived, it shouts in victory!

In open air, the people stare, and gather all around

To look, to wish, to ponder  what aerosol proclaims

Remembering the names, of those who came before us

With the closing of the City Centre Airport, building height restrictions are quickly changing in Edmonton’s downtown. This poem reflects my anxiety about what those changes may mean to Alberta Avenue.

Who turned the lights out?

I used to watch a sunset

Somewhere behind a mountain range

Of brick and girder grime

I used to stand rejoicing

My heart filled with the sight

I used to watch a sunset,

‘till they turned out the light.

As I was walking on Alberta Avenue a few weeks ago, I noticed that some snow sculptures were still standing from the Deep Freeze Festival. Those remaining shapes got me thinking of the beginnings of a new world, and made me ask the question: if I were to envision Alberta Avenue only in shape and sound, what would that look like ? . . . . . 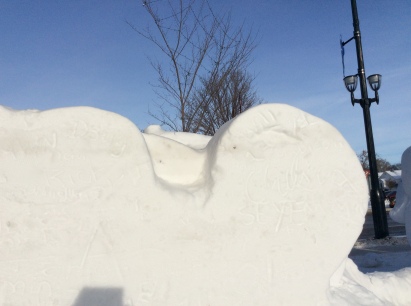 I’d speak as one creating the world again as new

I’d place into my stew.

the corner voices, pleading as they drown

Teardrop lights roll down your face—

I’d speak as one creating, the world again as new

these shapes and sounds fill up my song

and all rejoice of you.

February is a time of reflection for me. This is when I plan and ponder the upcoming year. As I walked on Alberta Avenue one evening, these were my thoughts. 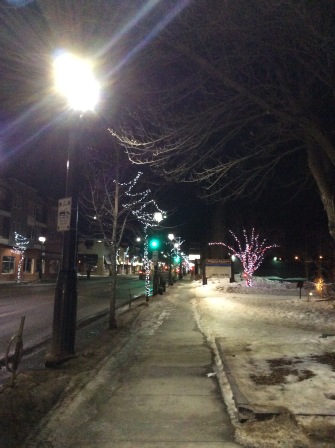 The Ave We Could Have

I walk upon this winter path at night

Instead of stars, it’s lit by incandescent light

No noble moon, no pale nor mystery

Cement and stone define its history

No wildlife skitter across this barren path

I stand reflecting beside the tow away zone

And gaze into this future Ave unknown

A twinkling crystal ball, which makes the darkness fear

A journey now begun can take us anywhere.

This November we had a sudden dump of snow, after which, a hawk began to visit our yard and eat the birds coming to our feeder. Even though we live in the city, nature still sometimes exerts itself in very hostile ways.

when into this idyllic scene

a hawk does suddenly careen

now one less sparrow to be seen,

a shadow in the light.

A King—he glides above his realm

reminding me life’s story’s made

of blood and bone and marrow.

Another “Deep Freeze” free family festival is set for this week-end, January 10-11, 2015 on Alberta Avenue in Edmonton. Join us!

“The Vikings are Coming Again!”  so watch out !

A golden craft of Viking lore

—it landed with a thud!

Thus this ship with sails so bright

had travelled into its final night

draped in skins, with swords, this crew

headed up Jasper Avenue—with Hildegard at the fore!

They needed nourishment to renew,

and dreamed of grog and venison stew

That was enough for Hildegard’s crew

“Onward to Deep Freeze—Come on!”

Having fasted and played, the shipbuilder, Sven,

had an idea to rebuild again

he knew just the wood to use for repair

they chopped down the Christmas tree in Churchill Square!

then hauled that tree down, those Norsemen with vigor

cut into planks with their saws all aquiver.

it soon was afloat

those Vikings now clambered on a boat that could float

and cheered the new land

they were not to remain

but would they ever return again?

check it out on:  http://deepfreezefest.ca/

Bard of the Avenue
Blog at WordPress.com.
Loading Comments...